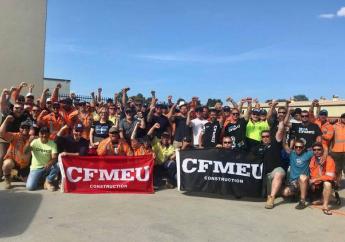 Workers at WGC Cranes in Wollongong and Smeaton Grange have returned to work after an agreement was reached in a dispute that led to a two-week strike at the two locations.

The dispute centred on a demand by management that workers at the two crane yards be split and placed onto two different pay agreements with different expiry dates. The workers refused management’s push to a two-tiered system.

CFMEU NSW Secretary Darren Greenfield said there was no justification for the company’s proposal which would have created animosity between workers who do the same work for the same bosses and have done for decades.

He said that WGC Cranes – which used to be a family business – had taken a much more hard-line approach to its workers since it was bought by Warren Buffett's Berkshire Hathaway.

“This dispute perfectly demonstrates how businesses have far too much power in our current workplace relations system,” Darren Greenfield said.

“And the outcome shows why it’s more important than ever for workers to stand united together, with strong unions, and fight the erosion of their rights and conditions.

“In this case, the might of Warren Buffet’s power was matched by that of our workers who stuck together, jumped through all the legal hoops to be able to go on strike, and were able to negotiate a fair deal in the end.

“It shouldn't be this hard to get a fair deal at work. We shouldn’t have to fight David and Goliath style battles just for a fair outcome, and this is why we need to change the rules.

“Our members are proud and relieved to have reached an agreement with their bosses and look forward to heading back to work this week. They'll walk back in the gates with their heads held high, and they absolutely should.”