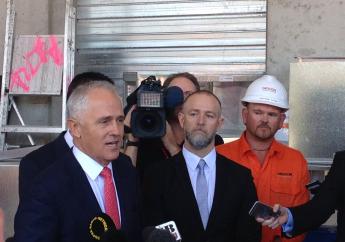 A construction company used by Malcolm Turnbull and Michaelia Cash at a press conference in 2016 to announce the prospect of a double dissolution election has admitted to breaking the law.

In the Federal Circuit Court in Canberra yesterday, Geocon admitted to contravening the Fair Work Act by refusing two union officials entry to a luxury apartment block building site in Canberra in March this year.

The two CFMEU officials were seeking to enter the site in accordance with right of entry laws. They were refused entry by Geocon.

The company admitted to a breach of Section 501 of the Fair Work Act yesterday. It faces a maximum penalty of $54,000.

In April 2016, the Prime Minister Malcolm Turnbull and then Employment Minister Michaelia Cash appeared at a Geocon construction site in Canberra to announce that failure to pass the ABCC legislation would trigger a double dissolution election.

CFMEU National Construction Secretary Dave Noonan said it was the second time in two months that the Turnbull Government had been embarrassed over the illegal behaviour of construction companies it had sided with in the media.

In May this year it was found that BCG, a construction company used in a media conference by Michaelia Cash, also broke the law over right of entry.

“Malcolm Turnbull stood beside Geocon on national television and accused unions of flouting the rule of law in the building industry,” Dave Noonan said.

“And now the very same construction company has admitted to a breach of the law on a construction site, two months after a similar incident.

“These laws are there to enable union officials to ensure that safety is being taken seriously on building sites. When these laws are broken, lives are put at risk.
“When it comes to workers’ safety, the CFMEU will not be intimidated by ruthless developers and their mates in Canberra.”