Company profits at a record high, while wages stagnate: Workers to rally against broken rules 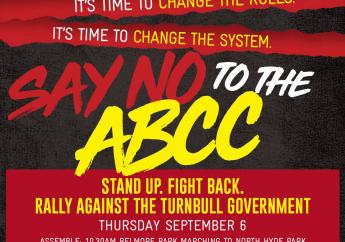 Workers from across NSW will rally in Sydney and Newcastle on Thursday 6 September to protest the Liberal Government’s broken industrial relations system and its attacks on building and construction workers.

“The system is broken. Construction workers build the profits for companies that don’t pay tax and kill workers with impunity.

“Building workers work long hours, face safety hazards daily and risk death, and yet have imposed upon them a set of laws that seeks to gaol and fine them and their unions in a bid to break their collective power to take strike action to win decent union conditions and safe union jobs.

“It’s becoming virtually impossible for workers to fight for proper pay and conditions.

“The Fair Work Commission is tipped in the bosses’ favour, and the Liberal Government’s ABCC is trying to smash building workers’ wages and conditions.”

The workers of NSW will rally in Sydney and Newcastle today to call for:

Say No to the ABCC: Rallies on Thursday, 6 September 2018