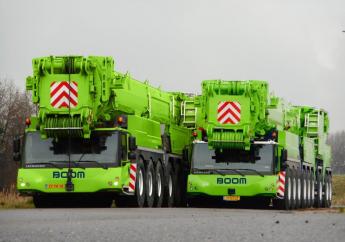 Employees at BOOM Logistics have not had a pay rise since 2013 or 2014 depending on which site they work at.

They have worked loyally and tirelessly to ensure that BOOM Logistics wins work and fulfils its contracts. They have been at the bargaining table for a long time.

All the Employees want is a fair wage increase and decent conditions that are the same across all sites. They work long hours, hardly seeing their families, many travelling all over the state to carry out highly skilled work operating highly valuable mobile cranes. They are good at their job and proud of the work they do.

Their employer, BOOM Logistics doesn’t want to come to the table and meet their claims.

Instead, Boom is offering its employees three different agreements with varying wages and conditions and denies the employees their fair claim.

The company cries poor but this is not reflected in its own financial records. Boom Logistics' 2017 financial report shows debt is dropping, the cost of cranes is dropping and it predicts the company could deliver 12% growth in the next 12 months.

They might say they'll struggle to meet the claims of their workers, but at the same time it seems that Boom has had no trouble affording:

-A 23% pay rise for chief operations officer Tony Spassopoulos who received $490K in 2017 compared with $398K in 2016
-Total executive pay to key management personnel increasing by 25%.
-Payments to non-executive directors totalling $2.7 million (up from $2.2 million in 2016) - a 22% increase
-Almost a $1 million yearly wage including bonuses for the CEO with 12 months’ pay if he is made redundant.

Rather than negotiate in good faith BOOM have run to their lawyers and are currently attempting a legal argument that would deny these workers their fundamental right to go on strike.

You can read more about this dispute here.